Goodbye is the story of a dysfunctional family. Tara (Rashmika Mandanna) is a lawyer who lives with her boyfriend Mudassar (Shivan Narang). She wins her first case and therefore goes to the party. Her mother Gayatri (Neena Gupta) calls and sends messages but Tara ignores them. The next day, her father Harish (Amitabh Bachchan) calls and that’s when she learns that Gayatri has died. She rushes to her hometown, Chandigarh to be with Harish. Harish has three other children – Karan (Pavail Gulati), Nakul, and an adopted son, Angad.

Everyone is gone. Karan and Angad also book the first available flight to Chandigarh. Meanwhile, Nakul is unreachable. Tara is the first to reach. She and Harish do not see eye to eye and the two clash over the funeral ceremonies. Harish also gets upset with Karan and Angad as he feels that they don’t seem moved by his mother’s demise. Harish’s behavior leads to fights in the house. But all of them have no choice. They must stay together under one roof for several days. What happens next makes up the rest of the movie.

Vikas Bahl’s story is engaging and well-intentioned. Most of us can relate to certain goings-on and moments. However, Vikas Bahl’s screenplay is not well developed. While it’s strong in the first half, the writing falls apart in the second half. The dialogues are funny and save some scenes as well.

Vikas Bahl’s direction is average. This is more in the zone of his acclaimed film THE QUEEN, as GOODBYE is also a slice-of-life film about a character who learns invaluable life lessons after a hellish experience. The first half will leave the audience in tears. The comedy is well integrated into the narrative and doesn’t feel out of place.

The tracks of the neighborhood aunties and P P Singh (Ashish Vidyarthi) are funny. They are very relatable because we have all met such people at funerals. The scene where the family members imagine Gayatri is talking to them is sweet and well-edited. The Haridwar track in the second half, featuring Pandit Ji (Sunil Grover) is also entertaining.

From now on, things happen randomly. Several aspects are enforced. Amitabh Bachchan and Neena Gupta’s animated flashback is cute and stands out on its own. But it’s misplaced and ideally should have come at a different point in the film. Many developments will leave viewers scratching their heads. Tara constantly complains that her mother didn’t believe in blind faith. However, this and Gayatri’s love for the ukulele are never shown in the flashback sections. The Nakul track is the biggest problem of the film.

The makers failed to prove that Harish and Gayatri had three sons. Apart from the two places, no one in the film is wondering where Nakul is and why he didn’t make it to his own mother’s funeral! Even the tracks of the other children are not easy to digest. It is still understandable that Harish was angry with Tara.

But his objection to Karan and Angad makes no sense. They seem to be just bad sons. One also will be confused as to why Angad is having a feast when he is really sad about his mother’s sudden death. Moreover, Angad’s love affair with the maid has no relevance to the main plot and the audience will wonder why the makers have added these bits without any rhyme or reason. 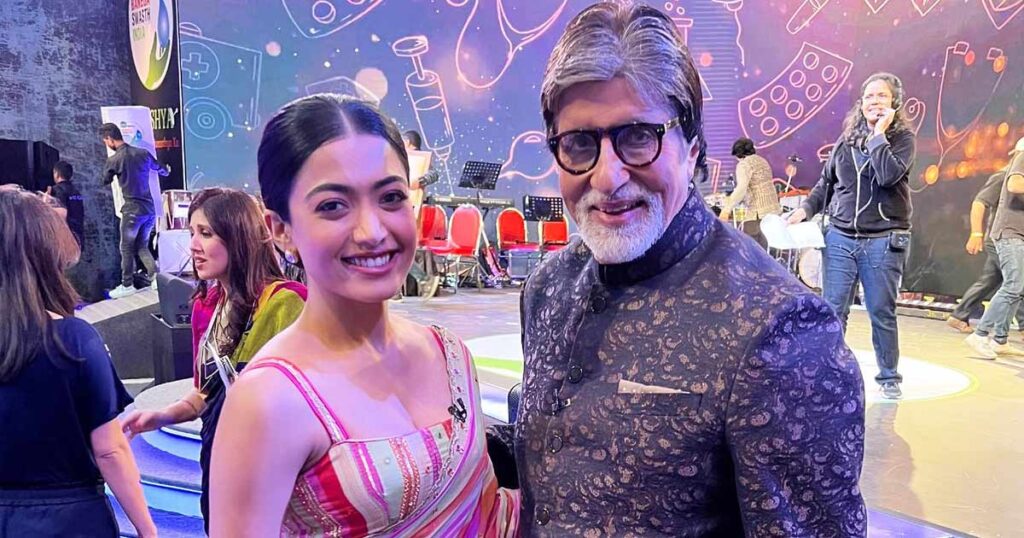 Amitabh Bachchan, as always, gives his best and gives a brilliant performance. The way he brings out the sadness and anger over the situation is beautifully rendered. Rashmika Mandanna has a great screen presence. Her acting is a bit off in a few places but otherwise, a great job by the actress in her first Hindi film.

Neena Gupta is adorable. Sunil Grover has a cameo but is very entertaining. Pavail Gulati and Sahil Mehta are decent. Ashish Vidyarthi is too good. Elli Avram (Daisy) is fair. Shivan Narang has no scope. The actors playing the role of Nakul, the maids, and the neighborhood aunties are fine.

Amit Trivedi’s music is well woven into the film. ‘Jaikal Mahakal’, ‘Chann Pardesi’, and ‘Maaya’ are quite touching. ‘The Hic Song’ is spicy. ‘Kanni Re Kanni’ is well-tuned but comes at the wrong point. ‘Happy Birthday and ‘Beautiful’ are forgettable. Amit Trivedi’s background score is better.

Sudhakar Reddy Yakkanti’s cinematography is neat and uncomplicated. Amit Ray and Subrata Chakraborty’s production design is a bit unrealistic, but it works. Akangshee Chopra’s costumes are straight from life. Famulus Media and Entertainment’s VFX is fine. Editing by Sreekar Prasad is superb.

Overall, GOODBYE works because of the touching moments, the relatability factor, and the performances. However, the film suffers due to the bizarre developments, weak second half, and depressive tone. At the box office, it will cost an average fare.